An award ceremony was held at 5:30pm on Thursday, May 30, 2013 at the Main Beach Parking Lot. Under a cloudy sky with light rain, Mr. Tim Bustos, the Executive Director of the Florida Bicycle Association formally presented the League of American Bicyclists' Bronze-level Award to the City of Fernandina Beach. Mayor Sarah Pelican accepted the award on behalf of the City, and then bicyclists in attendance departed on a 12-mile community bicycle ride to commemorate the designation. 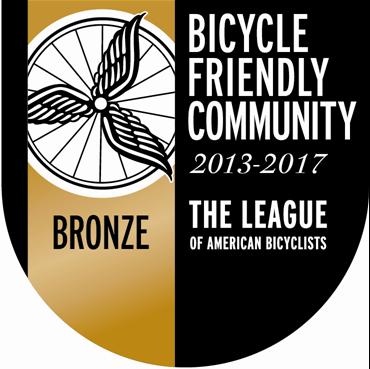 Fernandina Beach applied for designation as a Bicycle Friendly Community in 2011 and was awarded an honorable mention status. In May 2013, the City received an upgraded status of a Bronze Level Community.

Each application to the Bicycle Friendly America program is reviewed by a panel of national bicycle experts and several local reviewers are consulted to share their on the ground perspective of the applicant. The City is currently working towards upgrading its status through a re-submittal application in 2013. The City of Fernandina Beach, in coordination with Nassau County, the Florida Department of Transportation, and several bike advocacy groups within the community has witnessed a number of substantial achievements following the City's last Bike Friendly Community designation of “honorable mention”. Of these achievements, the City finds the following to be the most significant:

To continue improving its ranking the City, along with its partner organizations, have several planned activities within the next year including:

For more information about Bicycle Friendly Communities please visit the website for the League of American Bicyclists.