What is a CRA?

Redevelopment - Its the "revitalization" of a public area. AND, the "preservation" of a community's history. Its about building cohesiveness within "our community."

Based upon public comments offered at the previous City Commission meeting, concerns related to downtown parking need to be addressed as the initial phase of any waterfront/downtown development. Please follow the links below for a review of previous parking efforts. A committee led by Chief Hurley and including Fleet/Facilities Director Jeremiah Glisson, Streets Director Rex Lester, Stormwater Director Andre Desilet, and Senior Planner Kelly Gibson (at the sole discretion of the Committee, additional participants may be invited) will be asked to provide an update to the referenced documents and offer recommendations related to downtown parking to the City Commission at the City Commission’s Regular Meeting on August 1, 2017
2002 Parking Study
2009 Parking Study
2010 Paid Parking Workshop
2014 Parking Study
Parking Podcast
Parking Podcast (transcript) 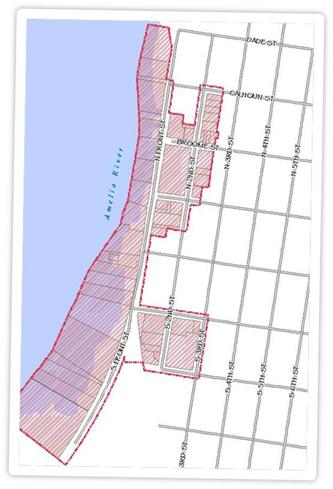 Quick Facts:
-City Commission is the “CRA Agency”
- CRA Area totals 39.5 acres
59 Total Properties
*14 Publicly owned = 19.7 Acres
*45 Private ownership = 19.8 Acres In 2005, City established the Amelia River Waterfront Community Redevelopment Area (CRA). The purpose of the CRA is to identify objectives and strategies for addressing the conditions of blight in a manner appropriate to the community. A Finding of Necessity (FON) was accepted by the City in 2004 citing the following conditions were present in the area:

In 2012, the Commission appointed an advisory board to research, investigate, and consider options that would support accomplishment of the CRA plan and its goals. The advisory board consists of 7 member that fall into one of the following categories and 1 non-voting City Commissioner:
The board currently meets twice each month on the 1st Thursday of each month at 3:15 PM at City Hall. Members of the public are always welcome to attend and particiapte in discussions.

Legal Documents Required for the establishment of a CRA include: Other important City documents to consult: